HomeNewsMirror Mirror on the Wall 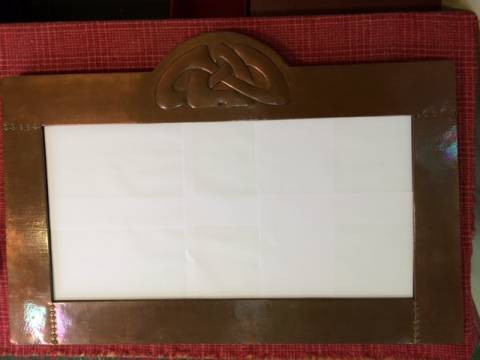 Mirror Mirror on the Wall

A 20th century copper Arts and Crafts mirror made by Manx designer, Archibald Knox, for Liberty London was a major highlight at the weekly antique and house furnishings sale, selling to a private buyer for £1,100. The sale, which was held at the H&H Auction Rooms in Carlisle, was well attended and saw a total of 800 lots go under the hammer.  Included was a collection of items from the house clearance of Crossthwaite, near Kendal.  Amongst the collection was an armorial plaque which sold for £60 and two grandfather clocks, one of which was a Richardson’s of Brampton which sold for £400. Without a doubt, the focus was on the Archibald Knox Liberty London Mirror made of beaten copper wrapped around pine.  There are a few examples of this type of mirror made, more often than not for Liberty London.  This particular design featured a Celtic knot made from copper. In 1899 Archibald Knox began designing jewellery for Liberty London, breaking away from convention with the ‘Cymric’ and ‘Tudric’ range.  Knox also designed a range of mirrors, nearly all made from copper, many of which featured a tulip design. In addition to his metal work, Knox designed a number of ranges for Liberty London including ornaments, wallpapers and fabrics.  Held in such high esteem, he was commissioned to design the headstone for the grave of Liberty London founder, Arthur Lasenby Liberty, which still stands today. Commenting on the sale of this highly desirable Liberty London piece, auctioneer, Stephen Farthing said:  “This is a fantastic example of the range designed by Archibald Knox for Liberty London and it is unsurprising it attracted such interest.  It was sold to a private buyer achieving £1,100.00, over twice the estimate of £400 - £500.” H&H Auction Rooms is one of the longest established auction houses in the North of England and holds a weekly sale of antiques and house furnishings. For more information visit www.hhauctionrooms.co.uk or contact the auction rooms on 01228 406 320.